If you’re reading this, you probably know that missing data can cause a lot of problems in a data analysis, from reduced efficiency at best to seriously mistaken conclusions at worst. You may even be able to recite the technical definitions of Rubin’s three types of missing data. Those definitions are all well and good, but if you’re like me, you don’t necessarily have such an easy time applying that knowledge to concrete data situations and determining how to proceed.

Well, I just discovered a new tool for reasoning about missingness that I’m pretty excited about, and I’d like to share it with you. Basically the idea is to use causal graphs to graphically represent our assumptions about the patterns of causality among the observed variables and their missingness mechanisms. And then we can visually follow simple path-tracing algorithms along the graph to answer questions like

This approach works so well because causal graphs are all about deducing which observed variables should be conditionally independent given which other variables—and it so happens that Rubin’s theory of missing data is naturally phrased in terms of conditional independencies.

There’s a lot to say about DAGs… frankly too much to fit in one tutorial-style blog post. For a crash course in what they are and how the work, I’d recommend the resources listed here. In the interest of keeping this post as concise as possible, I’ll assume you either have some prior familiarity with DAGs or that you’ve perused some of the crash course material I just referenced, but I will at least provide brief reminders about key concepts as they are needed.

The big idea is to augment the usual DAGs by adding nodes that represent the missingness in any variables that contain missing values, creating a so-called m-graph. For example, here’s a DAG for a situation where we have a predictor of interest X, an outcome Y, and two concomitant variables W and Z:

The causal model underlying this DAG assumes that

Now we suppose that Y and X contain missing values, so we add corresponding missingness nodes

. Specifically, we create the following m-graph:

What are we saying about the missingness in Y and X when we posit this causal model? We are saying that

Now that we’ve laid out our assumptions about how missingness is related to the relevant observed and unobserved variables, we can apply relatively simple graphical criteria to help answer the kinds of questions I laid out near the beginning of this post. These criteria are due to the amazing work of Karthika Mohan and colleagues (see References). Here I’m only going to focus on the conditions for recovering regression coefficients, but this research also lays out criteria for recovering the full joint, conditional, or marginal distributions of all variables in the graph.

We have separate necessary or sufficient conditions for recovering the coefficients from a regression predicting Y. A necessary condition is:

We can see in the m-graph that Condition 1 is satisfied. Although Y and

are statistically related (through their common cause W), Y does not directly cause

. The predictor X does directly cause its missingness node

, but this doesn’t matter for estimating a regression of Y on X. To give an intuition about why we can have MNAR in X but not Y, consider this figure from Daniel et al. (2012):

Meeting the necessary Condition 1 alone does not guarantee that we can recover the regression coefficient of interest; it just says that it might be possible. A sufficient condition for recoverability of the regression of Y on p predictors

Recall that two nodes A and B are d-separated by C if conditioning on C blocks all open paths between A and B (keeping in mind that colliders act “in reverse”: colliders block open paths unless they are conditioned on). If Condition 2 is satisfied, then we can recover the regression of Y on

simply by analyzing the non-missing observations at hand.

Glancing at the m-graph in Figure 2 we can see that the regression of Y on X does not meet Condition 2, because Y and

remain d-connected through W, which is not in the set of predictors.

So basically we have two options for how to proceed. The first and easier option is to consider instead a regression of Y on both X and W. Essentially, we decide that rather than seeking

, the simple regression coefficient of Y on X, we will settle instead for

, the partial regression coefficient that adjusts for W. In that case, Condition 2 is satisfied because this new predictor W d-separates Y from

. So we could recover the coefficients from this new multiple regression simply by analyzing the non-missing observations at hand.

The second option is for when we really do want

. In the graph from Figures 1 and 2, there’s not really any good reason for preferring one over the other, since the graph implies that X and W are independent in the population and thus

.3 So in that case we may as well just estimate

, since that would satisfy Condition 2. But what if the situation were slightly different, say, with X being a cause of W?

In this new graph, the path

is part of the total causal effect of X on Y, so we don’t want to condition on W. In this case, instead of Condition 2 we consider a new condition that allows for a set of q auxiliary variables

that help d-separate Y from the relevant missingness nodes, but that are not conditioned on in the regression of Y on the predictors

. The (sufficient) condition is:

If Condition 3 is satisfied, then

In the present case, conditioning on the auxiliary variable W satisfies Condition 3 because (a) W d-separates Y from

, and (b) W contains no missing values.

So now let’s return to the m-graph in Figure 2, where X does not cause W. We see that if we do not condition on W by adjusting for it in the regression model, then we still meet the necessary condition for recoverability (Condition 1), but we fail to meet the sufficient conditions for recoverability (Conditions 2 and 3). So we fall in a sort of in-between case… is the estimate of

recoverable or not? (Note that we saw above that it is recoverable if we apply the procedure dictated by Condition 3, but here we are asking if we can “directly” recover the estimate just from the simple regression of Y on X among the non-missing cases.)

may or may not be directly recoverable, depending on the functional forms of the structural equations. Remember that a DAG is totally nonparametric in that the structural equations it specifies can have any functional form and the variables can have any distributions (within reason). So for the DAG in Figures 1 and 2, the regression of Y on X and W could be a linear, additive function of X and W, or an interactive/multiplicative function, or any crazy nonlinear function. It turns out that, in this particular case,

interaction. This figure should help to give some intuition about why that’s the case:

For simplicity, Figure 5 considers an example where the auxiliary variable W is a binary dummy variable. In the additive example, simply analyzing the non-missing cases yields the same estimate (on average) as if all the data were fully observed—whether or not we condition on W. In the interactive example, the group with more missing data has a greater slope, so analyzing the non-missing cases skews the total estimate toward the group with the smaller slope. But by conditioning on W, we can either (a) recover the conditional effect of X on Y given W (through Condition 2) simply by analyzing the non-missing cases, or (b) recover the marginal effect of X on Y (through Condition 3) by taking a weighted mean of the regression lines at W=0 and W=1, with the weights proportional to the number of cases in each group prior to missingness (which we know, despite the missingness, since the missing values still have partial records on the other observed variables).

While I generally agree that pretty much everything is fucked in non-hard sciences, I think the lessons from this analysis of missing data are actually quite optimistic. It’s often assumed that having data missing not at random (MNAR) basically trashes your analysis if a non-trivial fraction of data are missing, which is frequently true in observational data. But the necessary and sufficient conditions laid out here suggest that, in fact, the simple strategy of listwise deletion—simply “ignoring” the missingness and analyzing the non-missing observations that are at hand—yields robust estimates under a pretty wide range of missingness mechanisms. And even in a lot of cases where you can’t just ignore the missing data problem, you can often still construct a consistent estimate of your parameter of interest (as in Condition 3) without needing to use fancy procedures like multiple imputation or distributional modeling of the predictors. Even further, you may still be able to recover the parameter estimates of interest even if you can’t satisfy the sufficient conditions given here (as in the final example above). Finally, and more anecdotally, simulations I played around with while preparing this post suggest that, even when the regression coefficient of interest is not technically recoverable, the magnitude of bias is often small under many realistic conditions (see, for example, the magnitude of bias in the simulations of Thoemmes et al., 2015).

are just shorthand notation for

, indicating an unobserved common cause L.

2 Rubin’s third type of missingness, missing completely at random (MCAR), would be represented graphically by the relevant missingness node R being completely disconnected from all other nodes in the graph. An example of this would be if we flipped a coin for each observation and deleted the corresponding value when the coin landed heads. Although commonly assumed for convenience, MCAR is not actually very common in practice unless it is deliberately built into the study design.

3 Actually, while this is true in the special case of classical regression, it’s not true in general. See this later blog post of mine that discusses the fact that this property doesn’t hold in logistic regression.

.@DataCamp is a bad company, and I’m proud that we moved all of @HarrisPolicy off their products last year. Please do not use their platform - I recommend @dataquestio instead. #datascience #python #rstats #dataanalytics #dataviz twitter.com/bearloga/statu… Retweeted by Jake Westfall 2 days ago

@tcarpenter216 If you're testing for difference in slopes (interaction), why are you talking about the difference in correlations? Image below is from citeseerx.ist.psu.edu/viewdoc/downlo… 3 days ago 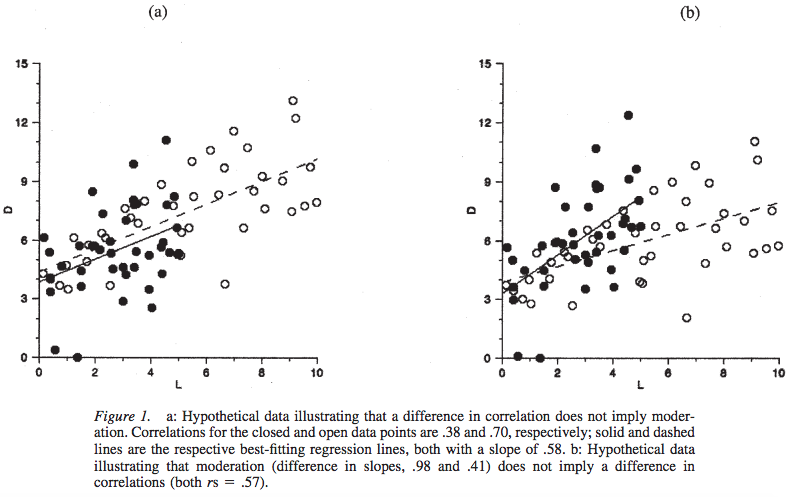 @Research_Tim @StuartJRitchie Major error if you ask me, worth £50 5 days ago

@talyarkoni If only we had statues about this, we could've remembered this history 5 days ago

@CrimAndyW @ryxcommar I find these improvements to AUC from downsampling pretty surprising and a bit hard to understand TBH. Evidently they're reliable in some cases, but I don't yet have any good intuitions for what cases we expect this to be true in 5 days ago

@CrimAndyW @ryxcommar For sure. Resampling can give you a new ROC curve, maybe even one with greater area under it, but that doesn't mean it's better for your use case! Converse is also true: resampled ROC curve may have same or even less area, but could possibly be better in the region you care about 5 days ago

@ryxcommar Up/downsampling *simply as a means to adjust the threshold* doesn't make sense for logistic reg. But there's some evidence that up/downsampling can lead to a bona fide (albeit modest) increase in out-of-sample AUC in the unaltered/unbalanced distribution: stats.stackexchange.com/a/474431/5829 6 days ago