In a multi-lab replication project, multiple teams of investigators team up to all run the same study (or studies) concurrently at different research sites. The best examples of this in psychology are the various Many Labs projects. There are lots of reasons why multi-lab replication projects are great. For example, they allow us to estimate and potentially model any between-site variability in the effect size, so we learn more about the generality of the effect. Another reason is that they can have greater statistical power than single-lab studies — as long as they involve a large enough sample size of labs. The point of this blog post is to underscore this point about the number of labs needed to ensure high statistical power.

We’re used to thinking about the number of participants as being, apart from the effect size, the chief factor in determining the statistical power of a study. And most of the time, in the kinds of single-lab studies we tend to run, this is basically true. Other factors matter as well — for example, the number of times we observe each participant, and the proportion of observations in each cell of the design — but as long as these other factors are within a typically sane range, they tend not to matter as much as the number of participants.

So now consider a multi-lab replication project. Here, the participants are clustered in labs. So the labs are the highest-level units. Remember the earlier example about having a study with 5 labs, each with 100 participants? In terms of its statistical power, this would be about like running a single-lab study with 5 participants, each of whom contributes 100 reaction times. In other words, it wouldn’t be great.

Let’s look at some actual power results. We consider a simple multi-lab design where we have

labs, each of which recruits

participants that are divided into two conditions (

participants per condition), and we observe each participant only a single time. In other words, we have a simple two-group between-subject experiment that is being replicated at

different labs, and the labs have random effects. The key quantity for determining the power of the study is

, the noncentrality parameter (for a non-central t distribution). It looks like this:

is the effect size (Cohen’s d),

is the proportion of random variation due to error variance (i.e., the ratio of the Error variance over the [weighted] sum of all the variance components), and

is the proportion of random variation due to Lab variance (actually, it’s the proportion of Lab-by-Condition interaction variance, but I’m calling it Lab variance for short). Statistical power is pretty much determined by the noncentrality parameter — there’s technically also some influence of the degrees of freedom, but that tends not to matter much as long as it is above, say, 20 or so. So basically, we can understand the power of this multi-lab replication design by considering this noncentrality parameter expression.

First, let’s just plug a range of plausible values into the variables comprising

and see what values of statistical power they imply. Here’s a series of contour plots where we vary the variables within plausible ranges.

The middle panel represents what I think are the most plausible values. There are a couple of interesting things to point out about these power results. The first is that…

The way to see this in the graphs is to consider the angle of the contours in each plot. More specifically, for any given point (i.e., pair of sample sizes) in any of the plots, consider the direction in which we would want to step to increase power fastest. For most parameter combinations, the path of steepest ascent up the power surface goes up along the y-axis (number of labs) more than it goes sideways along the x-axis (participants per lab). This is especially true when there is a lot of Lab variance (

, in the right-hand column), but is still usually true when there is little Lab variance (

, in the left-hand column).

As you can see, most of the time there is a greater benefit (i.e., statistical power will increase faster) to increasing the number of labs. This is especially true if there is a lot of Lab variance. But it tends to be true even when there is little Lab variance. The cases where it makes more sense to increase the number of participants per lab are when you already have a large number of labs but a small number of participants per lab. And let’s face it, your multi-lab replication project is probably not in this part of the space.

Increasing the number of participants per lab — but holding constant the number of labs — will not, in general, cause statistical power to approach 100%

This one is important. We tend to assume that as long as we continue to recruit participants, eventually we will have high statistical power. So even if we didn’t recruit as many labs for our project as we had hoped, we should be able to compensate for this by just recruiting more participants per lab — right? Unfortunately it isn’t so. The truth is that if we hold constant the number of labs, statistical power does not approach 100% as the number of participants per lab approaches infinity. Instead, power approaches some maximum attainable power value that can possibly be quite small, depending on the effect size, number of labs, and the Lab variance.

This can actually be seen pretty easily by considering again the expression of the noncentrality parameter:

In the limit as

approaches infinity, the term in the denominator involving

disappears, but the term involving

does not, so the whole noncentrality parameter converges to a finite and possibly small value. Here’s what the situation looks like graphically for a handful of representative values of the variables:

The curves in each panel are unlabeled because, honestly, they don’t really matter. (If you want to know the power values for specific parameter combinations, the first graph is better for that anyway.) The point is just to show that when we increase the number of labs, power does eventually approach 100%, and the values of the other variables simply affect how quickly this happens. But when we increase the number of participants per lab — but, crucially, hold constant the number of labs — power sometimes approaches a value close to 100%, but often does not. The maximum attainable power will tend to be low when (a) the effect size is small, (b) the number of labs is small, (c) the Lab variance is high.

The main conclusion is pretty simple. Multi-lab replication projects are great, and you should do them… but when you’re designing them, you should really try hard to recruit as many labs to collaborate in the project as you possibly can. You actually don’t need that many participants from each lab — the first figure shows that unless the Lab variance is tiny, you get quite diminished returns by recruiting more than 100 or so participants per lab — so perhaps this is a selling point that you can use to convince more labs to join your project (“we would only need you to run a few dozen participants!”).

If you want to do your own power analyses for multi-lab designs like this, or for other more complicated designs, you can use my PANGEA app.

@jarlogan It's an unfortunate distribution for X because of low variance and therefore power. But other than that I guess I don't see what the killer problem is. Errors look plausibly homoskedastic or even normal. I would honestly proceed with OLS. Is your main worry about power? 1 hour ago

This morning on Counting Stuff, I go on and on about "churn" and how it's the tip of an iceberg of meticulous work that needs to be done to get to it Also I forgot to take a picture of freshly churned butter and I regret everything. counting.substack.com/p/churn-is-hard Retweeted by Jake Westfall 16 hours ago

@deaneckles Sometimes, yeah, for sure. In those cases I do think we're likely to engage a new dataset in "confirmatory mode." I'm just claiming that overall in DS this confirmatory mode happens a substantially smaller % of the time. Much less than half the time IMO 4 days ago

@PhDemetri @andrewrwyatt I had a bit of an adjustment period around this too, but once it sank in I realized how much I actually appreciate it. Now I can focus on just building the top panel and not preemptively building the bottom panel: 4 days ago 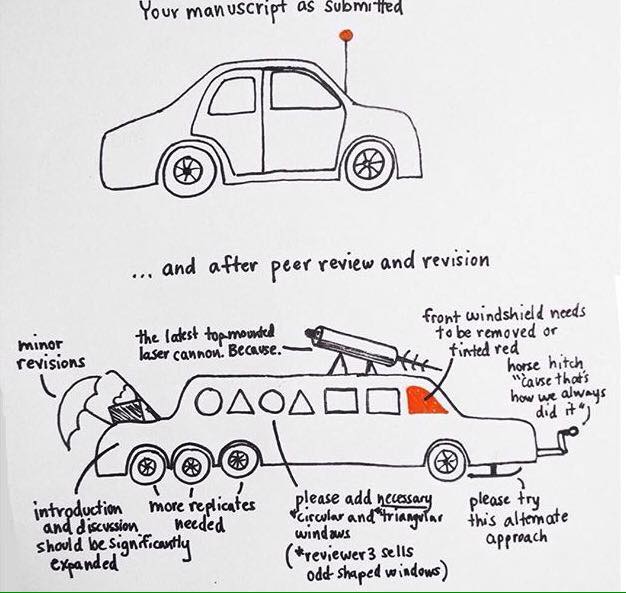 @PhDemetri @andrewrwyatt It's very liberating when you realize you no longer need to worry about whether your method/analysis is perfect enough to satisfy Reviewer 2. It just has to be enough to convince yourself & your coworkers that the method basically works and/or your conclusions basically hold 4 days ago

@deaneckles In data science this is probably not the case. More likely the new dataset is a database table you recently learned existed that you think could be useful for some current or future project. There is no key hypothesis, you really just need to understand the data 4 days ago

@deaneckles I think this is different in data science (the context here) vs. actual science. In actual science, a new dataset is likely data you acquired (maybe collected yourself) to test some pre-formed hypothesis so you can ultimately publish a paper. In that case you're probably right. 4 days ago

@ProfMattFox I don't know, but my guess is the use of this term in regression stems from even earlier usage of the term in math, e.g., curves defined by parametric equations often have a "dummy variable" t 6 days ago

Counter-intuitively, if your recommender is trained on data collected from past interactions with recs, retraining new models regularly doesn’t resolve the issue of performance decaying over time and can actually make it worse. Here’s why... Retweeted by Jake Westfall 7 days ago